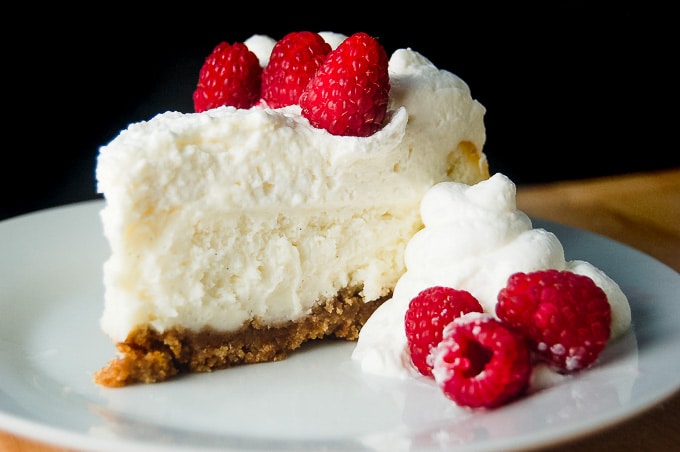 I'm sure you've seen a million recipes for cheesecake claiming that it's the "best" ever, but I'm here to tell you ... this cheesecake recipe is gonna knock your socks off! Grab your spring-form pan and let's get started!

What makes this cheesecake extra yummy is this amazing graham cracker crust. My secret? Using light brown sugar instead of white sugar in the crust to add an extra layer of richness!

Start by preheating your oven to 375°.

Place the graham crackers in a plastic Ziploc bag and crush them with a rolling pin until they have a fine consistency. Put the crushed graham crackers and the rest of the crust ingredients together in a small bowl and mix until well combined. The texture should look and feel like damp sand.

Press the crust mixture into a spring-form pan lined with parchment paper. I like to make sure I press some of the crust up the side of the pan.

Bake the crust for about 10 minutes, remove it from the oven and let it cool while you put together the cheesecake filling.

IMPORTANT! Turn your oven down to 320° after you've removed your crust from the oven. 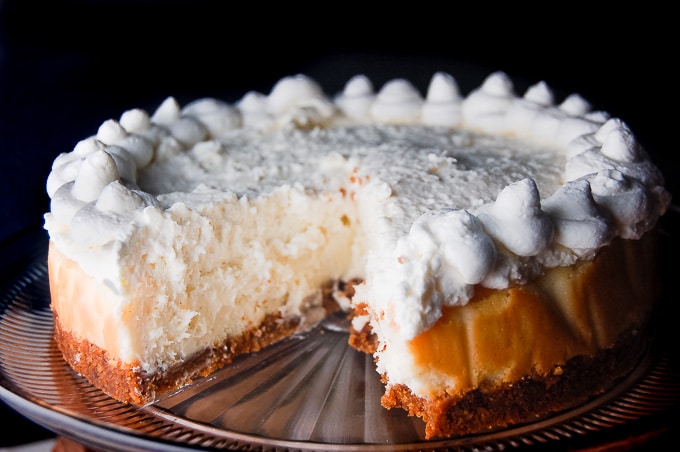 In a stand mixer, blend the cheesecake filling ingredients together using a paddle attachment until it becomes smooth and creamy. Don't over mix. It's important not to incorporate too much air into the batter.

CHEESECAKE BAKING TIP: Always allow your ingredients to come to room temperature before mixing. This will prevent lumps in your cheesecake. I've also started using brand name cream cheese because it does have a tangier taste than the store brands and it gives a much smoother filling.

Pour the mixture over the crust, smooth the top with a spatula and bake for one hour at 320°.

Remove the cheesecake from the oven and run a sharp knife around the inside rim of the spring-form pan so that the cheesecake won't stick to the sides. Don't be alarmed if the cake looks jiggly when you remove it from the oven, this is normal. Let it cool on a counter-top for about an hour and then place into the refrigerator to set up overnight.

Want to talk about a cheesecake game changer? The White Chocolate Mousse topping puts this cheesecake straight over the top!

Make the white chocolate mousse and place it alongside the cheesecake in the refrigerator to chill overnight (keep them separate at this point, you will want to spread the mousse onto the cheesecake right before serving).

When you are ready to serve the cake, spread the mousse on top and then remove the spring-form pan. Peel the parchment paper away from the sides and slide the cake onto a serving platter. Add toppings like whipped cream and fresh fruit or even chocolate sauce.

Add this easy homemade whipped cream to the top of this vanilla bean cheesecake for decadence overload!

You are going to be so proud to serve this cheesecake. Don't be surprised when you are bombarded with compliments!

Make sure you watch my video How to create a leak proof water-bath for your cheesecakes!

If you tried this Vanilla Bean Cheesecake recipe let me know how you liked it. I love hearing from you! Make sure to RATE this recipe and leave me a message in the comment section below! Follow me on FACEBOOK, PINTEREST and INSTAGRAM to see more yummy food! 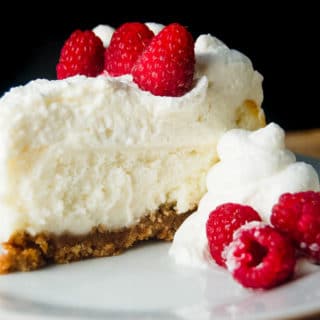 Need a spring-form pan? This is the one that I use : Nordic Ware Leak Proof Springform Pan, 10-Cup, 9-Inch, Red (affiliate link)