New Orleans BBQ Shrimp is made with juicy, succulent shrimp cooked in a buttery Worcestershire sauce, seasoned with black pepper and Cajun seasonings.

There's no need to break out your grill because it's prepared conveniently, right on your stove top.

It takes under 15 minutes to put this meal on the table and the flavor is insanely delicious!

New Orleans BBQ Shrimp has been around since the 1950's when Pascal's Manale Restaurant & Bar opened in New Orleans.

The chef was attempting to recreate a dish that one of the customers had described from a trip to Chicago.

By the time he was done, he had an even better recipe and this was to become a New Orleans menu staple, BBQ Shrimp.

The best part of of this dish is the rich sauce. Nothing beats a warm slice of crusty french bread drenched in it!

The bread is sliced, topped with butter and Asiago cheese and then popped in the oven for a few minutes to melt. The result is amazing!

This dish makes for an excellent appetizer, as well as the main part of a meal.

The traditional way to serve BBQ Shrimp is with the peels on, but, you can always peel them before you throw them in the sauce.

Store leftovers in the fridge for up to 2 days, covered. 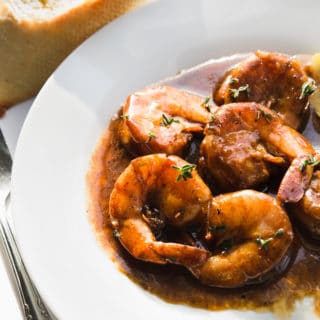