This Homemade French Bread recipe makes the best bread with a fluffy center and a deep golden, crunchy crust. Nothing beats the smell of homemade bread baking in the oven!

Fresh hot french bread, straight from the oven? There's nothing like it!

French bread is great for dipping in your favorite soup like turkey gumbo and making chicken salad sandwiches.

This french bread takes about 3 hours to make from start to finish, but most of that time is spent waiting for it to rise. The actual hands on time is about 20 minutes.

If you’ve never made homemade french bread you’re gonna love how easy this recipe is.

How to make french bread from scratch

Here is the basic steps needed to bake french bread.

Allow to cool completely before slicing. Or, pull off a piece and slather it with butter while it's piping hot. Your choice! (I'll choose the latter.)

Slicing the loaf while it's still hot, the inside will be gummy. 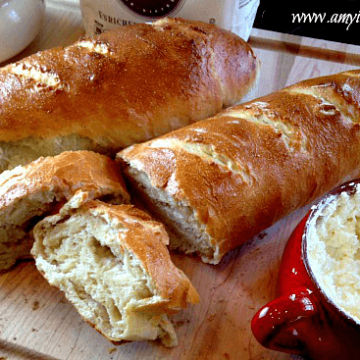